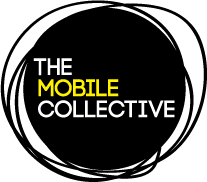 Barrow Hacking for the Climate ii 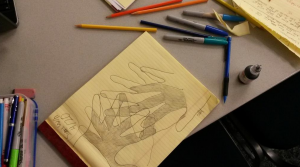 If you’ve been following the blog, you’ll know that we headed up to Barrow, Alaska for a two day Citizen Science Hack at Ilisagvik College.

The Hack was co-organised by TMC, for the Citizen Cyberlab outreach programme, and by Diana Mastracci, who is exploring community responsive citizen science as part of her PhD thesis “How can Information Communication Technology (ICT) assist Arctic hunters to adapt/respond to climate change?”.

The main aim of the hack was to get students started with hacking their own citizen science projects by introducing them to some basic skills—micro-controller hacking and mobile app design.

For the micro-controller side, I brought along some Arduino starter kits and a collection of sensors. For the mobile side, we decided to use Mozilla’s excellent new mobile app builder, AppMaker—at least for the design phase, with me coding up some quick prototypes based on the designs. AppMaker has just launched and doesn’t have all the components needed for citsci apps yet—if you’re interested in using AppMaker for citizen science, please come to our workshop at MozFest2014 “AppMaker for Climate Change”, where—if the workshop proposal gets accepted—we’ll be building a citsci component wish list and some citsci components for AppMaker. 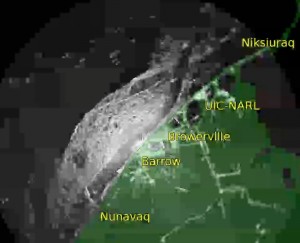 We also wanted students to think about how citizen science and especially ICT can help in measuring and responding to the impact of climate change on the local environment and community.

To give one example of that impact, the decreasing ice cover brought about by climate change on Alaska’s North Slope has meant that traditional hunting activities like whaling have become increasingly risky. Only this Spring, a number of hunters became trapped on the shorefast ice after it unexpectedly became detached, in what is called a break-out. The photo at right shows a radar image of the break-out from the UAF’s Barrow sea-ice radar

The hack is also an important part of Diana’s PhD research, where she is doing ground-breaking work, pushing the limits of citizen science to include co-design with local communities. As she explains it, “In my PhD I am devising a suitable bottom-up methodological process for the development of ICT tools grounded in the needs of subsistence communities in Arctic Alaska. I am particularly interested in finding ways in which ICT can help to foster local values and traditions while contributing to science.” An understanding of local traditions and their importance in subsistence customs was therefore a key requirement for the hack. To meet this requirement, Diana invited a village elder to make a presentation to the course on how climate change is affecting Inupiaq subsistence traditions (more on this below). 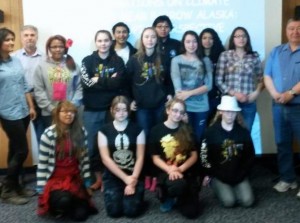 Some came from cities and towns like Anchorage and Barrow, but others came from small isolated villages like Atqasuk and Kaktovik.

They were there for one week to participate in a STEM “summer camp” at Ilisagvik College. Our Citizen Science course took up two of those days.

We started by explaining how the course would work—a mini-hack with teams and challenges. At the end of the course, they would make presentations and we’d invite everyone from the College to come—and anyone from the local community who was interested in citizen science. 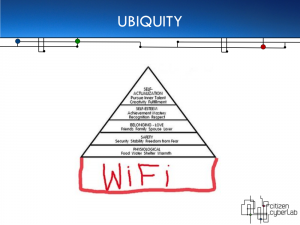 Then we launched into slides on citizen science and climate change in Barrow. We used the standard TMC slide deck for Citizen Science with some slides from Diana.

My slides were definitely pitched too high.

The maslow meme slide (not my idea—don’t recall where I found it) is funny only for MBAs.

If I do this again, I think I’ll focus on cool things you can do with Cit Sci and DIY Science.

We ended the morning with a lightening session on micro-controllers. 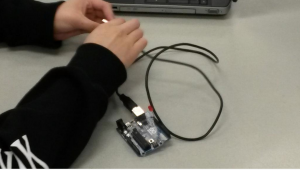 We divided the students in to 3 groups, giving each group an Arduino Uno, a breadboard, a USB cable and lots of wires and sensors (CO, Ethanol, CO2, PIR, Proximity, Temp/Hum).

The original idea was to alternate app development with incremental instruction in micro-controllers, possibly running a parallel session for students with more interest. In the end, there wasn’t enough time or enough of us for this. We got as far as getting students to wire up a blinking light and to change its behaviour in the code. We covered variables, data types and functions.

But the science instructor at Ilisagvik who runs the STEM camp showed interest in using micro-controllers in her curriculum, so I left the starter kits and some sensors behind. I’ll be helping her, long-distance, with an air quality micro-controller project later in the Fall.

In the afternoon, Diana invited an elder to speak to the group. Elders are the guardians of traditional knowledge and techniques and are therefore very important and highly respected in Inupiaq communities. We were lucky to get Eugene Brower, a whaling captain, whaling representative and one of the most respected elders in Barrow.

Elder Brower gave an overview of Inupiaq traditions, pointing out in each case how these traditions have been affected by climate change. His presentation was truly impressive and surpassed our expectations.

The presentation gave the students all they needed to start thinking about climate change apps with local relevance. 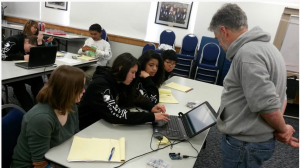 We spent the rest of the day brainstorming our apps, with Diana and me moving between tables helping with ideas.

We asked groups to focus on what they’d like to do, without worrying about how—we’d tackle that on day 2.

In the morning of Day 2 we focussed on technology. Now that we had ideas, how could we turn them into reality?

Two groups had mobile app ideas and the third group wanted to use social media on the web, so we gave some coaching in how to design an mobile app. If you’re interested in the ideas, have a look at our course wiki, where you’ll find each group’s presentations. I think it’s fair to say we were surprised by how tech-savvy the students were and especially at the level of their technical design skills. The two mobile app groups did professional-looking wireframes.

In the afternoon, we concentrated on preparing presentations—power point slides and a mock presentation for each group before the public arrived. Not everyone was equally comfortable about presenting in public, but fortunately each group had at least one person eager to be the spokesperson. 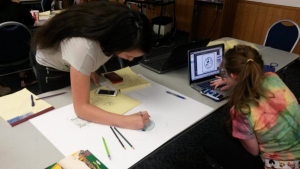 About 30 people turned up for the presentation, including the College president. The presentations got an enthusiastic reception, and the College president asked us to follow up with the mobile apps and develop them for actual use. I spent the next day doing a quick prototype for the Game Tracker app (briefly available on the web, before we realised we might be in danger of infringing federal wildlife regulations!). 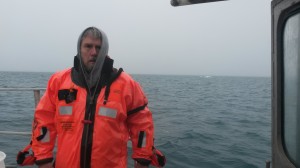 That’s me, out on the Chukchi Sea for a sensor deployment trip with the Ice group from UAF, doing my best imitation of an icicle.

They make you wear these scary hazmat-orange inflatable suits.

I was told: “If you fall in, you have 3 minutes. With this suit, you have five hours.”

Didn’t stop me from freezing.

Many thanks to Linda Nicholas-Figueroa, the STEM camp coordinator at Ilisagvik College, for inviting us to give the course and for her time and effort in making everything run smoothly.